In looking back over my previous entries, I’ve come across entries that need revamping. As I revamp some of the older entries, the original versions will be removed and completely updated. This entry, originally posted on September 27 of last year and published as a single entry, will be broken into smaller pieces. In addition to reformatting, I’m adding information from newer sources and adding a few new locations.

Originally constructed as a Presbyterian Church in 1851, this building served as a hospital during the Civil War and it was during this time that a legend was born. A young Englishman, Sydney or Sidney Grimlett, who fought for the Confederacy, died and his body buried nearby. Following the war, the building returned to its sacred purpose and was used as a church and also held classes after a fire in the main building of the college in 1887. When the church moved to new quarters, the building briefly served as a YMCA center before becoming home to the Auburn Players in 1927.

Perhaps something during the building’s conversion to a theatre awakened Sydney’s spirit. The spirit returned to the theatre where he made his presence known with spectral sounds and the occasional appearance. According to Kathryn Tucker Windham, his name and story was discovered by students using a Ouija board in the theatre during the 1960s. When the theatre moved to new quarters in 1973, the spirit was invited to move with them and has supposedly taken up residence in the new building, the Telfair Peet Theatre. The building was renovated for use as the university chapel and now serves as a non-denominational chapel for students.

Mrs. Windham’s version of the story reveals some of the cracks in the story. First, there is some question as to when Sydney’s ghost first appeared, some sources believe he showed up when the building became a theatre, others say that he appeared in the 1960s or 70s. Even the history seems questionable. A good deal seems to be known about Sydney. In a 1998 article, the university’s reference archivist states that it is believed that Sidney served with the Sixth Virginia Cavalry and was wounded in Atlanta in 1864. Ten years later, a paranormal investigator investigating the chapel states that Sydney belonged to a Texas regiment.

Regardless, students apparently still have the occasional run-in with Mr. Grimlett in the Telfair Peet Theatre and in the University Chapel. Students during productions may have equipment fail, props disappear and they leave M&Ms candies to appease the mischievous spirit. The Alabama Paranormal Research Team investigated the chapel in 2008 and experienced some odd occurrences in the ladies restroom. Perhaps Sydney is spending his time between the theatre and the chapel where he died so many years ago.

Where Indian hunter had pursued the panting deer, and, gazing on the same moon that smiles for us, wooed his dusky bride, now arose a building of purest ionic architecture, devoted to female education. – Robert Anderson McClellan

Founders Hall, with its four columns called Matthew, Mark, Luke and John, was constructed between 1842 and 1845 (most sources are incorrect). This four-columned edifice replaced a small four room house where the female academy had originally been founded in 1822. The school became affiliated with the Methodist Church around the time Founders Hall was constructed. In 1931, the school began accepting male students and in 1975 the school became a state school.

Under the leadership of President Jane Hamilton Childs, the school survived the turbulent period during the Civil War. Union forces under the leadership of Russian native, Colonel John B. Turchin terrorized and sacked the town. An anecdote tells of President Childs confronting troops advancing towards her female academy. Producing a letter supposedly from Abraham Lincoln, she handed it to Col. Turchin. He was apparently satisfied by the contents of the letter and saved the school from the raping and pillaging that might have occurred. The story makes clear that the letter was a forgery.

The Athens State University campus has a handful of haunted structures including McCandless Hall and Brown Hall, but writers have noted that Founders Hall seems to have the most activity. One legend holds that a female student was killed when her hair caught fire from the candles she a friend were holding while trying to sneak out after curfew. Her spirit is blamed for disembodied footsteps, lights turning off and on by themselves, cold spots and a phantom figure seen at the building’s windows. This is the most common story told.

Jessica Penot’s Haunted North Alabama documents the legend of a stable boy named Bart who apparently worked for President Childs. This young man, fancied by many of the young woman at the school, was kicked in the head and killed by a horse. His mischievous spirit may still linger with that of one of the workers who helped build the hall. The worker, who was a bit of a tippler, lost his jug of whiskey in one of the columns. One version of the story has him dropping his jug inside the column when his supervisor approached. In another version, the worker left his jug sitting on a column and went to lunch. When he returned, the column had been built up encasing the jug for posterity.

Few schools can offer the tremendous collection of architecture that Florida Southern College can offer with its collection of nine Frank Lloyd Wright designed buildings collectively called, “Child of the Sun,” the largest concentration of Wright’s buildings in the world. Like many much larger schools, though, Florida Southern has also attracted an impressive amount of folklore, some of which is associated with the Wright buildings of West Campus. Among those buildings that have acquired stories is the chapel, the first of Wright’s visionary structures to be constructed.

Known at the time as Southern College, the school suffered a great deal during the Great Depression. The school’s president, Dr. Ludd Spivey, approached Wright with the chance to design a campus for the school. Wright embraced the idea wholeheartedly and began work. The school lacking in funds but wealthy in enthusiasm used the labor of students and professors to construct many of the buildings. In the Annie Pfeiffer Chapel, legend has it that the choir screen was incorrectly installed, which has given rise to one of the legends.

Outside of Daniel W. Barefoot’s marvelous Haunted Halls of Ivy, much campus lore throughout the South and the country has been left undocumented, except that of Florida Southern. Dr. Alexander M. Bruce, an English professor and Assistant Dean of Academic Affairs at the school at the time of publication, documented the school’s legends and lore in his 2003 book, The Folklore of Florida Southern College. Not only documenting ghost stories, this book records the stories about the school’s and Dr. Spivey’s relationship with Wright, lore surrounding the construction of the buildings and stories about campus issues like hazing.

Having discovered this book after writing the original version of this article, I was excited to read the ghost stories surrounding the Annie Pfeiffer Chapel. Barefoot records that the spirit of Wright had been reported in the chapel, still contemplating the wrongly installed choir screen. Dr. Bruce states that the story is pure bunk, but he proceeds to record ghostly tales from many of the other campus buildings including dormitories like Joseph Reynolds and Allan Spivey Halls.

While the story isn’t true, it does gloss over some very important history of this architectural masterpiece.

Florida Southern College isn’t the only school with an architectural masterpiece, Flagler College in St. Augustine. Ponce de Leon Hall, the centerpiece of the campus, is an early Moorish Revival masterpiece from the architectural team of John Carrère and Thomas Hastings, leaders in the Beaux-Arts Movement. Constructed by Henry Flagler as the Hotel Ponce de Leon in 1888, this opulent hotel featured intricate woodwork and some of the earliest works by stained glass master Louis Comfort Tiffany. The hotel served many wealthy guests until the mid-60s when competing roadside motels sent its finances plummeting.

In 1968, the hotel began restoration and renovation to convert it into Flagler College, a private, four-year, liberal arts school. The development was lead by Lawrence Lewis, Jr., Henry Flagler’s grandson and the school has expanded by purchasing other historic structures for restoration as college buildings. The school is now ranked by the Princeton Review in the top tier of southeastern colleges.

While college students now roam the halls where America’s elite of the Gilded Age once walked, the occasional specter from the past still appears. The stories and legends of Ponce de Leon Hall are numerous and include not only anonymous hotel guests but the shades of the hotel’s visionary founder, Henry Morrison Flagler and two of his three wives. Legend holds that the first mysterious phenomena occurred just after Flagler’s death in 1913. He died after a fall in his home, Whitehall (which is also haunted), in Palm Beach. His body was returned to St. Augustine where his vision for Florida as a vacationer’s paradise first began to take shape. A public viewing was set in the hotel’s rotunda and while mourners stood by the massive oak doors slammed themselves shut. Shortly after the funeral, a small tile on the floor was discovered that bore a resemblance to Flagler. Students have reported run-ins with a spirit believed to be that of Flagler.

Among the more anonymous spirits are the “Lady in Blue” and the spirit of a young boy. The legend behind her sad spirit tells of a young woman having an affair with a married man. When he refused to divorce his wife to marry her she began to race up the staircase to pack her things. His foot caught on the hem of her long skirt and she tumbled down the stairs breaking her neck. The spirit of the little boy has been encountered in the hallways where he asks if students are able to come and play with him. Like the Lady in Blue, it can be assumed he was likely a hotel guest, but their identities are unknown. Then again, the phantom footsteps, spectral music and disembodied voices heard throughout the hotel simply serve to remind the modern day of the college’s Gilded Age history. 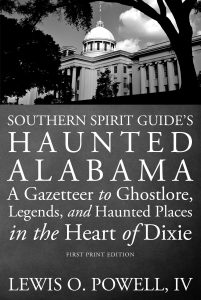