In the South, lineage is everything. It’s not just in Augusta, Georgia where your grandmother’s maiden name may be important, but almost everywhere you will be asked, “Who’s your daddy?” or “Who’s your kin?” In the South, your social standing is determined by your parents and who you are related to. Only if you are very accomplished can judgments be made solely upon your own merits without consideration to your family and relations. Of course, this can all be traced to the Old World origins of Southern aristocracy.

If a Southerner were to inquire about the lineage of ghost-hunting, they should be duly impressed; for it is a long and venerable lineage, one that British film critic Roger Clarke traces in his recent book Ghosts: A Natural History: 500 Years of Searching for Proof. Within these pages is a host of important figures whose curiosities have extended into the realm of ghosts. Clarke provides an introduction to Robert Boyle, one of the fathers of modern chemistry, as he extends his curiosity into the existence of spirits and meets with philosopher Lady Anne Conway and noted clergyman Joseph Glanvill to discuss the existence of such anomalies. 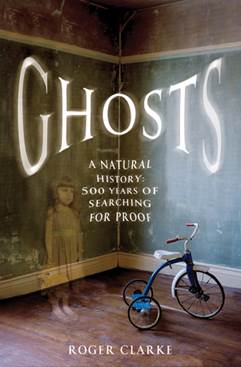 After an exploration of the curious events at the Hampshire estate of Hinton Ampner, Clarke introduces us to the large household of the Reverend Samuel Wesley in the rectory at Epworth. Plagued by a spirit that the family eventually named “Old Jeffrey,” this household would eventually produce the Methodist movement lead by the Reverend Wesley’s son, John, with the aid of his brother, Charles. This brief, albeit well-documented case was even commented upon by poets Samuel Taylor Coleridge and Robert Southey and its queer details have since elicited modern study. It is also necessary to note that John Wesley would spend a few years ministering in the Georgia colony. A statue of the earnest Wesley now presides over passing ghost tours in Savannah’s Reynolds Square.

Of course, no introduction to British ghost-hunting would be complete without an introduction to a similar family in Essex, in an old rectory called Borley. The family of the Reverend Bull was plagued by spiritual activity that attracted the attention of an early paranormal investigator, Harry Price. His examinations into the home and its legendary history would attract worldwide fascination and skepticism.

As Clarke deftly traces the branches and twigs of ghost-hunting’s British line, he weaves together the famous, the infamous, and a host of curious laity into a legion of ghost-hunters. This family is bound by late night ghost stories exchanged in country parsonages and the palaces of the aristocracy, amateur scholars inquiring of the haunted in dusty volumes, and creepy séances held in the parlors of London. It’s a magical web of spiritual study that existed until the world’s skepticism was aroused, and this web of inquiry was forced underground. Public interest in spiritual study still rears its head, more recently through the vein of popular culture.

Sadly, Clarke’s book only explores the world of ghost hunting from a British perspective. America in and of itself has a rich history steeped in the paranormal and since the 19th century has been at the forefront of spiritual study. Notable instances in America’s contribution to this venerable lineage include the Bell Witch case in Tennessee; the fascination with spiritualism held by Mary Todd Lincoln and the séances she conducted in the White House; the Surrency Poltergeist in Georgia; the Fox sisters and their spiritual communications; the Spiritualist movement of the 1920s; the creation of Cassadaga, a mecca for mediums in Florida; Sarah Winchester and her mystery house; and Louisiana’s Myrtles Plantation, America’s Borley Rectory. However, the remnants of Puritanism and the criticism of the validity of the field throughout the nation have done much to suppress in-depth studies.

This book provides a detailed and entertaining exploration of British ghost-hunting. If I were teaching classes about the paranormal, this book would be first on the list of assigned reading. I imagine that eventually this will be counted among the foundational books in paranormal literature. It will certainly hold a prized place on my bookshelf.

Thanks to St. Martin’s Press, I’m offering a single copy of this book to one lucky reader. To enter, please comment on this post with your favorite entry in this blog. I’ll put all of the names in a hat and select one to receive a copy of this marvelous book. This giveaway will end November 4th.